Periodontal disease is a microbial inflammation with local but also systemic manifestation. It affects the gums, bone, and other tissues that surround and support the teeth. It is very common (over 50% of the population suffers from it) and is the leading cause of tooth loss in adults. Its mildest form is gingivitis, which, if left untreated, can progress into the most severe form of periodontal disease, which is periodontitis. Chronic periodontal disease has been shown to affect the body’s overall health. Aggravating factors for the manifestation of periodontal disease are smoking, heredity, stress, diabetes mellitus, malnutrition, pregnancy, and others. Gingivitis is among the main and most common gum diseases.

A. What is gingivitis

Gingivitis is a superficial inflammation that is manifested mainly by the appearance of red, swollen gums that bleed during brushing of teeth. It is often accompanied by bad breath (halitosis). If not diagnosed and treated early, it often develops into periodontitis.

Gingivitis requires a great deal of attention from the patient as it can lead to periodontitis, which can lead to tooth loss. While in early stages it may not be perceived by the patient, it is easy for the dentist to diagnose and requires regular oral checkups to prevent it and treat it promptly.

It usually occurs in people that neglect tooth cleaning and do not brush teeth properly. Thus, the microbial plaque, which produces toxins, causes inflammation in the periodontal tissues, i.e. the gums. The result is that the gums recede or bleed very easily.

The main cause of periodontal disease is the combination of microbes that are normally present in the mouth with the accumulation of food residues, which together form the dental microbial plaque. The absence of daily rigorous oral hygiene results in the proliferation of these microbes, their conversion to pathogens and gradually the appearance of increasingly severe inflammation.

Teeth care in gingivitis is of prime importance for its effective treatment. The plaque is a layer of bacteria that affects the teeth and can be daily removed via thorough brushing and dental flossing or use of interdental brushes. If neglected, it can lead to bacterial infection, one of the most common causes of gum inflammation, which gradually progresses to periodontitis.

Summarizing the causes for gingivitis, we would say that it is poor oral hygiene, smoking, diabetes, broken fillings as well as hormonal disorders that are common in pregnancy.

The appearance of periodontal disease and its severity may be influenced by factors such as:

The purpose of the treatment is to repair the anatomical lesions, having as ultimate goal the facilitation of good oral hygiene.

The treatment involves removing the inflammation and dental calculus (tartar) through a ‘deep cleansing’ in 3 sessions and training the patient on good oral hygiene.

Many times today the treatment is supplemented by laser, helping to reduce the microbial population.

Gingivitis treatment involves at least 2 cleanses over a period of 15 days. The patient must adhere strictly to good oral hygiene instructions. It is usually recommended to use an antiseptic solution and a special toothpaste. Just before a second cleanse, gingivitis is reassessed. Cleansing sessions are completely painless for the patient using special anesthesia.

The occurrence and progression of periodontal disease can be prevented through the proper application of systematic oral hygiene (proper brushing, dental floss, interdental brushes, oral solution) and regular check-ups by the dentist.
It should be noted that often periodontal disease is present without any obvious symptoms, so a visit to the dentist is necessary at least once or twice a year.

In gingivitis, gums are frequently red and inflammatory, i.e. swollen and bleeding, and actually, in advanced gingivitis they may bleed on their own. Also, there are a few times that the gums recede (recession) in a way that the root of the teeth is revealed and the teeth appear longer. 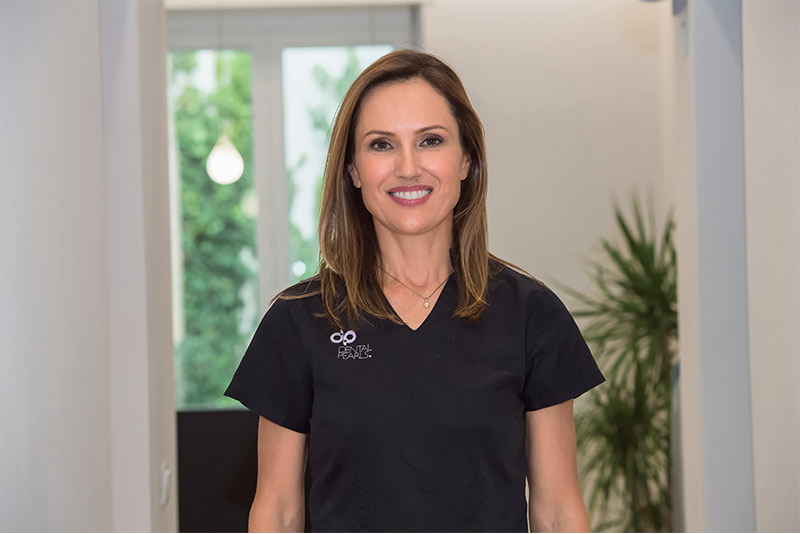 Dental Syrgeon Vicky Deligeorgi founder of the DENTAL PEARLS, graduated from the Dental School, University of Athens in 1995

This website uses cookies to improve your experience while you navigate through the website. Out of these cookies, the cookies that are categorized as necessary are stored on your browser as they are essential for the working of basic functionalities of the website. We also use third-party cookies that help us analyze and understand how you use this website. These cookies will be stored in your browser only with your consent. You also have the option to opt-out of these cookies. But opting out of some of these cookies may have an effect on your browsing experience.
Necessary Always Enabled
Necessary cookies are absolutely essential for the website to function properly. This category only includes cookies that ensures basic functionalities and security features of the website. These cookies do not store any personal information.
Non-necessary
Any cookies that may not be particularly necessary for the website to function and is used specifically to collect user personal data via analytics, ads, other embedded contents are termed as non-necessary cookies. It is mandatory to procure user consent prior to running these cookies on your website.
SAVE & ACCEPT